What is Blockstream's patent strategy?

Our patent strategy is designed to accomplish one simple goal: ensure that Blockstream technology is available for all to use, royalty-free. The patent pledge is the simplest part and the one that makes our intentions most clear, and so it is the first one we're implementing. There are several other parts we'll be putting into place as well:

We will be using a modified version of the Innovator's Patent Agreement with our engineers, which allows the inventor to grant a patent license to users directly if we try to use a patent for anything but defensive use. (The modification is to a stronger version, so that there are fewer cases that count as defensive use.) See the FAQ on the modified IPA for more information.

The pledge itself includes a commitment to using the Defensive Patent License, which creates a pool-like structure allowing all DPL users to use each other's patents freely.

We are working with others on a patent pool (separate from the pool-like DPL) to commit to mutual defense; we are exploring assigning our patents to an independent foundation to be part of such a pool. We are working on trying to make our work more accessible to the Patent Office so that it is available as prior art.

All of these have the same basic purpose: to make our technologies available for use. We're doing these in parallel because no single strategy provided all of the outcomes we wanted–to provide a clear statement of intentions, that could be relied on by the general public and institutions, that would protect against patent aggressors, that would assure our own employees that their work would be used as they intended, and that would benefit the broader community.

That sounds complicated. Can you draw that out for me? 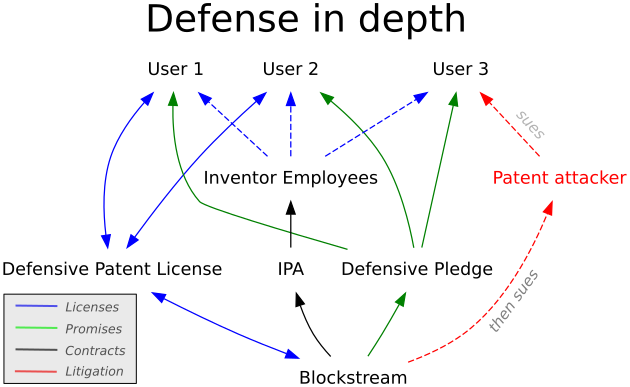 Why are you doing this? Is there a catch?

There's no catch. Bitcoin's success depends on developing and building upon new technologies, which isn't possible where one party has locked them up; we've already seen adoption of cryptographic technology stifled because of patent lockup. Without that kind of permissionless innovation, we believe the risk to the development of the technology and the industry from patent wars is greater than the risk that our company will topple because others can use what we've created and made freely available. We believe the strength of our ideas comes from the utility they provide to the widest possible set of users, and that is best achieved outside of restrictive patent regimes and proprietary systems.

You mention that you may grant other licenses--what does that mean? Isn't the pledge enough for others to rely upon?

We promise that anyone may rely on the terms of this pledge. If you use any technology we have patented, you may use it royalty-free, for any purpose, unless your actions violate the conditions we've stated (such as launching patent litigation against us or other users of our technology).

There are many organizations whose normal processes require an explicit license, or who may want additional promises such as warranties, and so they don't wish to rely on a pledge alone. We are open to entering into such license agreements under individually-negotiated terms. But you do not need a license to use Blockstream technology royalty-free.

Our pledge is intended to be legally binding, something that anyone can rely on, and we've written it to maximize the likelihood that it would be interpreted that way in court. (We're not alone in using them as part of our strategy--for example, Red Hat, Google, and Tesla all use some form of patent pledge, as do many others.) However, while pledges remove many of the difficulties from creating a promise, a contract removes many of the difficulties from its enforcement, which is a motivation behind some of the other pieces of our strategy such as our adoption of the DPL, and is one additional reason we offer individual licenses.

What is the Defensive Patent License? How does it interact with the rest of the pledge?

The Defensive Patent License is a license that creates a commons among its users, who freely share with each other. Users of the DPL commit all of their patents under the DPL, promising royalty-free use to all other DPL users, promising to share freely with others who agree to also share freely. If you are not a DPL user, you are not affected by it. However, if you are also only using your patents defensively (or don't plan on filing patents at all), we encourage you to use it yourself; any person or entity may adopt it for their own patents. (Even if you are not interested in going as far as sharing with everyone, the DPL allows you to share your patented technology with those who have also agreed to share theirs.)

What about hardware? Why is it carved out?

While we will be offering all of our patents under the Defensive Patent License v1.1 as an incentive to encourage others to also adopt a defensive-only approach, for the time being hardware-related patents are not included in the rest of the promises of the pledge.

We started out with a clear understanding of the right strategy for software in the industry: we don't believe software patents are the way to success for us or for Bitcoin. For the hardware we're building, the landscape is different, the economic and informational implications are different, and we haven't had the opportunity to give it an equal level of consideration. This pledge is binding, and commitments we make cannot be revoked--so for now we are limiting its scope. (We don't have any hardware patents yet, or any specific plans for them, and as promised in the pledge will list them if we have any so that there is no uncertainty about what is covered.)

If you really don't believe in software patents, why not work to invalidate them instead?

Patent reform is a long-term project, with no guarantee of success. We need a strategy that is the best one for the current environment. But our goals are not in conflict, and we would welcome a real long-term patent reform solution.

I want to do the same thing. Can I adopt this pledge?

Yes! We encourage everyone who shares our goals to adopt the pledge. (The text of the pledge is available under CC-BY 4.0.) And we'd love it if you let us know.

You can contact us for more information at defensivepatents@blockstream.com; we're happy to share our insights and experience as well as put you in touch with others who have helped us or are pursuing similar strategies themselves.

What happens if Blockstream disappears or gets acquired? Is the pledge still valid?

Our intention is for this to be binding even in the event that we change hands or have to sell our assets; the pledge is intended to run with the patent and we've included all the language we could to make that happen. This will take care of most cases. Additionally, the IPA gives inventors the right to sublicense even upon a transfer of the patent to another owner.

But we know that it is possible for pledges to be insufficient for certainty even though we intend them to be. We are working with others in the industry and the defensive patenting space to form a pool for mutual defense, and we are looking at assigning any patents we may have to that pool, so that control of those patents can belong to something designed for stability rather than subject to changes of control.

What does this cover? Are all Blockstreamers' projects under this pledge now?

This covers only technologies invented and patented by Blockstream employees as part of their work for the company, or which have otherwise come under Blockstream's ownership or control. Any patents owned by Blockstream employees on their own personal projects that have not been explicitly assigned to the company are not covered under this pledge. We know that many of the projects people contribute to, including other projects in the Bitcoin community, are already under terms that allow the work to be freely reused by the public, and we encourage others in our industry to follow the same licensing practices for any patents they may hold.

Yes, Bitcoin is both open-source and unpatentable. The original ideas as published in the Bitcoin whitepaper were not patented. Inventors have a year after making their inventions public to file patent applications, and then the window is closed. Because of this, the basic Bitcoin system is free of patent restrictions; it is too late for anyone to come forward and apply for new patents on Bitcoin now.

What can still be patented are the incremental improvements, complementary technologies, or additional applications of the technologies that are currently being developed. We think the open strategy has been a good one, and we want to ensure that our work can be used to further open development, like Bitcoin itself, rather than risking it being locked up by short-term opportunists.

What is the Innovator's Patent Agreement?

The Innovator's Patent Agreement (IPA) was originally developed at Twitter, and you can read more about it and the original motivations behind it from Twitter's own blog post and FAQ.

It is an agreement between an organization and its employees to ensure that the inventors named on patents can control whether their patents are used offensively. Under the IPA, inventors named on a company's patent can offer licenses to potential users if their company tries to enforce the patents for anything other than defensive purposes. The IPA provides a benefit to the community and also a benefit to our employees, giving them a right to ensure that their work will be used in ways that they consent to. We will be including a modified version of the IPA as part of our employment agreements.

Why did you modify it? What are the differences?

The original IPA allows the company to use the patents for defensive purposes before the inventors' right kicks in. Because of that mechanism, a lot depends on exactly how "defensive purposes" is defined. In the original, that definition is fairly broad, and would not allow the inventors to prevent aggressive patent enforcement in some cases that are not always considered "defensive". In our version we've narrowed it, so that there are fewer things that can be considered defensive uses without needing the inventors' agreement . You can see the differences between the two documents on Github.

(Also, thanks to Twitter for licensing the original under CC BY 3.0 to allow for modification and reuse. Our modified version is available under the same terms.)