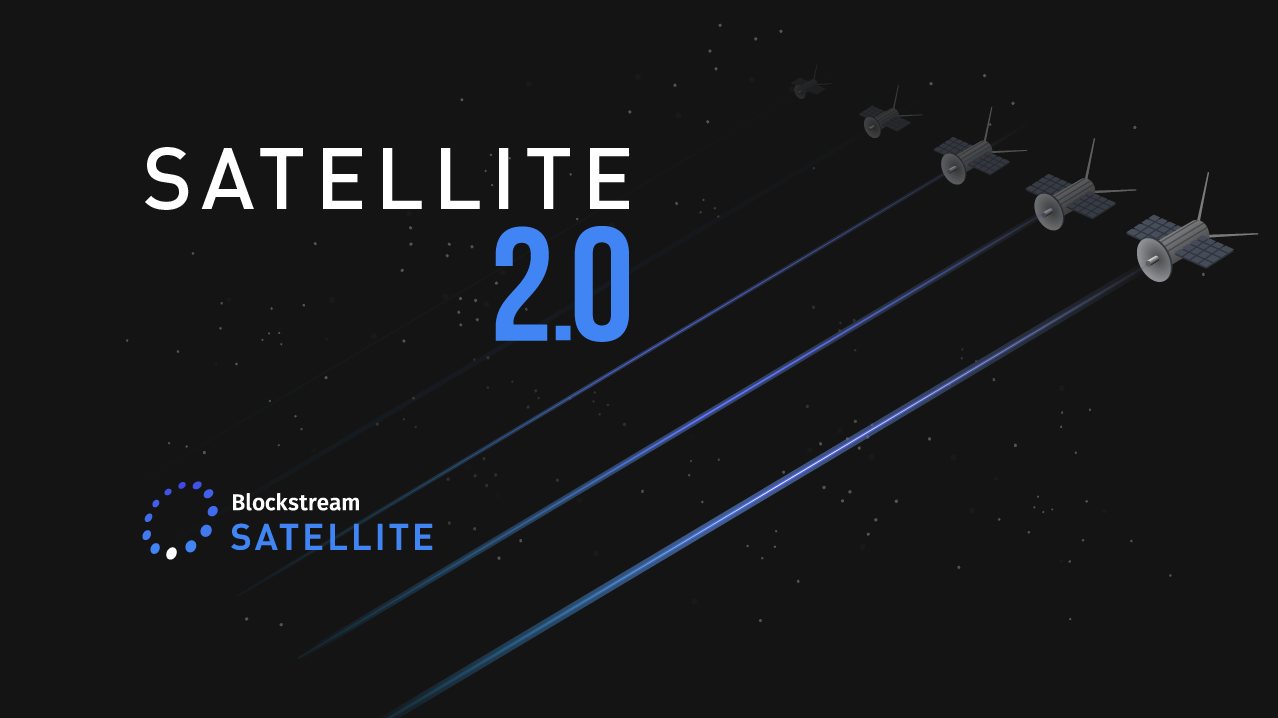 We are pleased to announce Blockstream Satellite 2.0 is now live, bringing a standards-based transmission protocol, more bandwidth, additional coverage areas, and the ability to sync a Bitcoin full node all the way from the genesis block up to today.

This marks a major update since the 1.0 network launch in August 2017, the expanded network coverage update, and the Lightning-powered message API launched December 2018.

Two ready-to-go receiver kits and an optional antenna kit will be available soon for pre-order:

Both kits above will require an additional antenna. A minimum 60cm / 24in dish is required for full synchronization, and if a user does not have one available they can preorder our flat panel antenna kit:

Pre-orders will be processed on a first-come-first-served basis, with the first batch to be shipped mid-June, so interested users should order soon to be first in line!

Existing Blockstream Satellite users should note that we will be disabling the 1.0 network on June 1st 2020. While your hardware will still be compatible with the 2.0 network, it will require a software update and switching to the new 2.0 service before this date.

Blockstream Satellite 2.0 moves to the DVB-S2 protocol, bringing improvements in spectral efficiency, signal reliability, and delivering higher bitrates. A standard protocol like DVB-S2 represents a significant upgrade over the custom protocol used in 1.0, by providing compatibility with hardware-accelerated DVB-S2 equipment—avoiding the need for a dedicated computer for decoding.

The DVB-S2 protocol is also more resilient as it works under lower signal-to-noise ratios, making it more reliable at the edges of coverage zones, less affected by weather interference, and less sensitive to equipment tuning.

The 2.0 update increases data capacity by more than 13x, from approximately 120 kbps to roughly 1.6 Mbps, with a spectrum bandwidth increase of only 4x, from 300 kHz to 1.2 MHz. With increased bandwidth, we’ve also increased the maximum file size for user-broadcasted API transmissions from 10 KB to 1 MB.

Two further areas of improved efficiency from the update include:

Taken together we are able to reduce the volume of transmitted data by over 50% as compared to the uncompressed Bitcoin transaction data sent with the old forward error correction scheme.

Instead of requiring users to connect their Bitcoin full node to the internet for the initial sync—as was the case with 1.0—Blockstream Satellite 2.0 now enables full history synchronization! Blockstream Satellite users can hook up a Bitcoin full node and fully download the entirety of the Bitcoin blockchain, from the original 2009 genesis block right up to today’s latest transactions…absolutely no internet required!

To ensure that users can access the entire bitcoin history and latest transactions at the same time, we take advantage of the multiple-stream technology provided by the DVB-S2 protocol to send two data streams over the satellite network: the Bitcoin full history stream and the recent transaction stream.

The Pro Kit is designed to stream Bitcoin blockchain data for consumption by multiple devices. The equipment connects via Ethernet, sending decoded transaction data to your network for receipt by Bitcoin full nodes and other Bitcoin-related software on your local network. The data is multicast as a UDP/IP digital stream, similar to other real-time data over internet systems such as VOIP and video conferencing protocols.

Blockstream Satellite coverage has been expanded over the Asia-Pacific region thanks to the addition of a new satellite to the network that includes support for the more widely-supported Ku-band (1.0 was previously C band only). For an updated coverage map, see our official Blockstream Satellite page.

Get Started with Blockstream Satellite 2.0

New users should keep an eye on the Blockstream Store to be ready to place pre-orders for delivery in June. For users that would like to update their existing setup, or just prefer hands-on DIY, there is a parts list available on the Blockstream Satellite GitHub. Setup guides are also available at the same GitHub (and will be included with the official kits).

For users that want to send their own messages over the network (now up to 1MB!), get a Lightning wallet ready and head to our Blockstream Satellite API page.