The internet brings us many wonderful things such as new business models, new-found access to information, and new technologies like Bitcoin. It’s also a place where misunderstandings can lead to misquotes, misconceptions can take on lives of their own, and the facts can get lost on the information superhighway.

In this post, we debunk some of the common myths that we’ve read about SegWit. 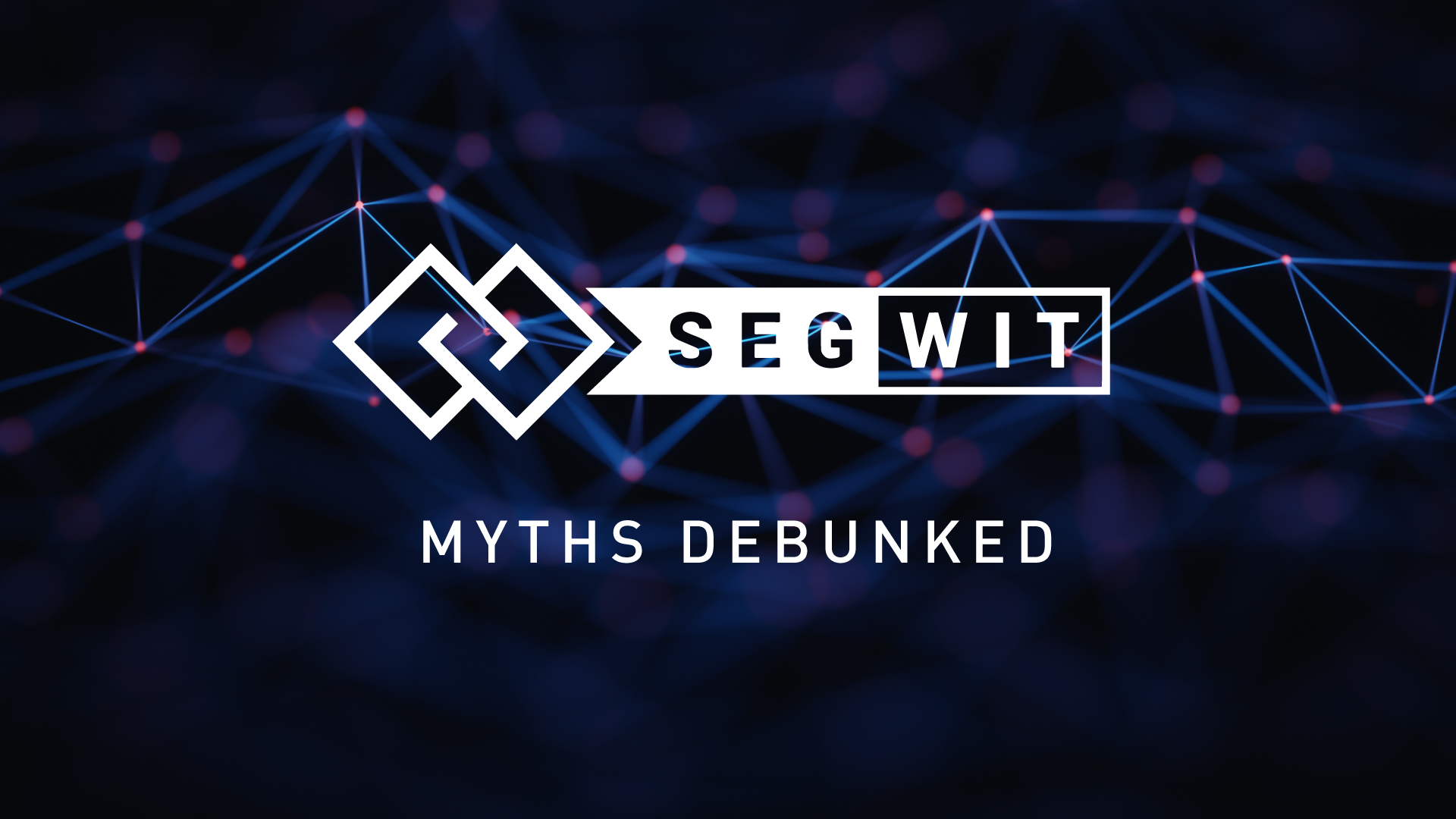 Myth #1: Blockstream has patents in SegWit.

No, we don’t. We don’t know of any patents anywhere that apply to SegWit. We have not applied for patents on SegWit, nor are we going to. If anyone (including us) was considering it, it would already be too late because the public disclosure of SegWit was more than a year ago. Although we have an open patent strategy to protect the ecosystem from patent trolls and we encourage others to adopt this approach too, our patent strategy doesn’t apply here because this myth is simply not true.

We see SegWit as an open source technology contribution to the ecosystem. SegWit is a proposed improvement to the Bitcoin protocol that includes a variety of features to enhance security and performance. It was a public proposal discussed in December 2015, and its creation was a collaboration across the Bitcoin community, including multiple individual participants and companies, including Blockstream.

Myth #2: Blockstream has a commercial intent behind its support of SegWit.

Nope. Blockstream does not have a commercial intent behind our support of SegWit.

Where We Do Have Commercial Intent

We do have commercial intent behind our commercial product Liquid, the world’s first federated sidechain that enables rapid, confidential, and secure bitcoin transfers. The Liquid beta program is already well underway; testing and integration is in progress with a growing number of leading bitcoin exchanges, and we expect to move to production over the next few quarters. We also work directly with companies interested in adopting blockchain-based solutions and with partners like PwC and DG Lab to sell blockchain services and technologies to their customers around the world.

Where We Don’t Have Commercial Intent

Separate from our commercial activities, some of us contribute to open source software. Our founders are long-time Bitcoin protocol developers, and several of us are participants in the community of 500+ contributors in Bitcoin Core. In addition, we are collaborating with multiple startups, academia, and individual contributors to create Lightning, an open source Bitcoin micropayment system that supports high volumes of tiny payments using proportional transaction fees and that supports faster settlement, which is important for many use cases. We work on open source projects like these not with a commercial intent, but because we believe that the technologies can make a significant, positive social impact.

Those of us who contribute to open source software do so as individuals in open communities, not as representatives of any organization. Additionally, Blockstream employees are backed by a contractual agreement to ensure individual developers retain complete independence in their open source participation, free from influence by management or the company.

Myth #3: SegWit is necessary for Liquid.

Not true. SegWit is not yet activated yet on mainnet Bitcoin, but Liquid is already in use by leading bitcoin exchanges. Liquid does not currently use or depend on SegWit on the Bitcoin mainchain in any way.

Liquid is a standalone product made up of code that is based on the Bitcoin codebase, extended with additional features, such as Confidential Transactions. Liquid and Bitcoin are two separate codebases and two separate things.

Myth #4: SegWit is necessary for Lightning.

This is partially true. Technically Lightning is possible without SegWit, but it is less flexible, less efficient, and more complicated. SegWit makes developing layer two protocols, like Lightning, a lot easier by removing some of the potential pitfalls due to Bitcoin’s transaction malleability.

Lightning is not a commercial product; it is an open source protocol that anyone can contribute to and build products on. We do see an opportunity to include Lightning capabilities as a scaling mechanism within the private blockchain networks that we sell to our customers.

SegWit does not take transactions off chain. SegWit increases capacity by making blocks bigger, upgrades a number of bitcoin features, and provides a bug fix – specifically a transaction malleability fix – to improve multi-clause contracts. The transaction malleability fix does benefit payment channel mechanisms such as Lightning, but SegWit as a whole benefits everyone using the Bitcoin blockchain, regardless of whether or not Lightning would also be of interest to them.

Although Lightning uses SegWit, it is a separate technology. Every Lightning transaction is a valid Bitcoin transaction that can be posted to the Bitcoin chain, but Lightning provides a caching mechanism so that most transactions are netted between Lightning users without needing to be written to the chain. In that sense Lightning does delay and replace transactions (via netting) that might otherwise go on chain. This creates more capacity for more usage, opens up new use cases and applications, and enables new economic activity that wasn’t possible before.

But other than Lightning being made better with SegWit, SegWit itself does not take transactions off chain.

Blockstream benefits from SegWit the same as any other company out there that is building technologies based on the Bitcoin blockchain. Bitcoin has a design flaw – unwanted transaction malleability – where transaction IDs can change out from under you, which makes trying to build something that uses Bitcoin on the backend hard to do. SegWit fixes that and brings a number of related improvements. We benefit just like we believe everyone in the Bitcoin ecosystem will benefit to see SegWit become available, because it makes Bitcoin better.